That was the headline of the ad that caught my attention on Barnstormers on Sunday. I called my CFI and asked him to look at the ad a" />
Skip to content

That was the headline of the ad that caught my attention on Barnstormers on Sunday. I called my CFI and asked him to look at the ad and see what he thought about it. For the price that the seller was asking (which I have omitted above), the ad seemed too good to be true. I had never heard of a Wittman Tailwind until about a week or two ago. I’ve been in the market for a Luscombe (because Super Cubs, Cub Specials, and even J-3 Cubs are out of my price range) and recently missed out on two 8A’s that were for sale in Washington and Idaho. Since I want to fly a tail wheel with a control stick (not a yoke), my CFI told me that a Wittman Tailwind should be one of my considerations.

The ad I saw on Barnstormers certainly grabbed my attention, however it was located in Russellville, KY, a lengthy 1,600 nm (as the crow flies) away from me across the country in Yakima, WA. Up until now, my longest solo cross county flight was a 2.5 hour 200 nm jaunt around Eastern Washington in a Cessna 152.

My CFI called the seller yesterday and got all the important details (and some pix) on the bird. The good news: it flies. The bad news: it’s ugly. That’s pretty much the gist of it. I can live with that so then I called the seller and spoke with him for about 20 minutes and got all the details for myself. After hanging up the phone I began searching for the soonest one-way plane ticket to get to Kentucky which I found and it departs Thursday morning. 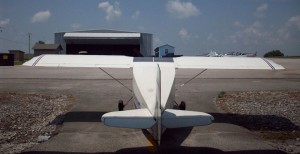 A couple hours ago I got online to do some Wittman Tailwind research. Naturally, the first place I went to was wittmantailwind.com and much to my surprise, it was unregistered! Heck, this domain might have some potential so I registered it a few hours ago and if I buy the Tailwind this week, I’ll be sharing more about it right here so stay tuned. :-)

9 thoughts on “Wittman Tailwind For Sale On Barnstormers”