One of my most favorite things about flying is sightseeing. Looking down upon the earth. I love it. One of my least favorite things about my Tailwind is the lack of sideways visibility. I understand that some aircraft can’t have windows that exceed a certain size, but I never understood why more Tailwind builders didn’t take advantage of the big flat area in the lower part of the door skin and install a window there. The added visibility would be immense.

In addition to the less-than-spectacular door visibility, N11018 was originally built with doors that latched on the OUTSIDE of the fuselage. This required having a latching mechanism that was on the OUTSIDE of the door skin. Previous owners did what they could to make them look “nice” and blend into the door surface, but ultimately it was nothing more than a bulging blob of cracked and weathered bondo that had been patched and painted over who knows how many times in the past 50 years. I’m a bit annoyed that I didn’t take photos of the latches before I began the disassembly. I did find some random photos and cropped them down so you could see the latches, but to truly understand the scope of their unsightliness you would have had to see them in person.

My plan was to do this: 1) Make new aluminum door frames with the latch mechanism on the interior side. 2) Relocate the latch hole to the interior of the fuselage. 3) Make new door skins with an upper AND lower window cutouts.

The door frames got started. Once again, I’m thoroughly annoyed with myself for not having taken more pictures of this part! BTW, a great way to make new door frames is to use paint stirring sticks and secure them to the fuselage tubing, then build the frame piece-by-piece. The paint sticks are readily available at places like Sherwin-Williams Aircraft Supply, Lowes Aircraft Supply, Home Depot Aircraft Supply and they have a pretty consistent thickness of 1/8″ which is a nice offset for something like a door frame. 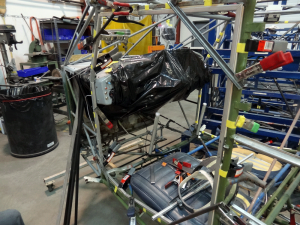 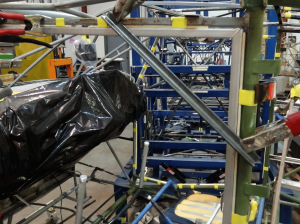 And here are the finished latches and frames. 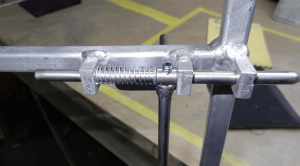 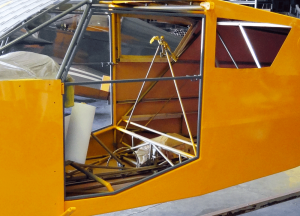 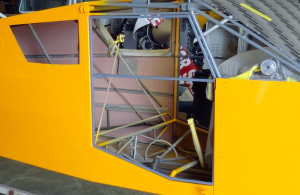 In the meantime I’ve been communicating with Jim Scoles (C-FYGY) of Canada who has been giving me suggestions and ideas for things like my wing tips, exhaust, and other stuff. I told him of my plan to make new aluminum doors skins with upper and lower window cutouts, and I even had the new skins already designed in Solidworks and ready to be lasered out at work when he suggested I skip the aluminum and make the entire thing out of polycarbonate. Why didn’t I think of that?

Sometimes the simplest plan is the best plan.