The sidewalls on N11018 definitely have some history. For starters, not one single screw hole is round any more. They are all stretched and oblong and what’s strange is that they are elongated in different directions. Some stretch vertically; other horizontally. Some stretched to the edge of the material so they weren’t able to be used. There is evidence that nutplates were once riveted on there. There are even cutouts for naca vents. Then the cutouts were covered up by pieces of aluminum that was riveted into place and the naca vents were then riveted on top of the pieces of aluminum that had been riveted in place to block them! Confused? You’re not alone. I’m still trying to make sense of that. It’s time to wipe the slate clean and make some new sidewalls. 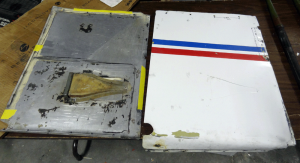 Notice the edge break-in the trailing (far left) side.

I started with some 18 gauge (.040″) pieces of aluminum and then the rest of the job was an afternoon/evening process of trial and error. I measured the screw locations on the fuselage then used a sharpie to mark where to drill holes on the panels and just repeated this process hole-by-hole. 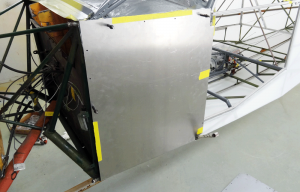 To do the bend with the clearance cutouts for the lift strut and gear legs, I used the old parts as best as I could for a general template to mark and cut out the part. I made the curved break by doing a series of minimal breaks. Once the curve was formed I used a combination of rotary tool, tin snips, and file to get the lift strut and gear leg clearances to size. It helps to have the fuselage on a rotisserie to do this part. Oh yeah, clecos are essential too! 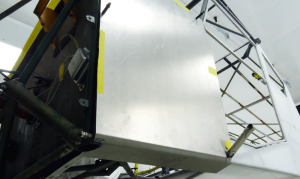 As stated earlier, I made these parts from 18 gauge material (only because I got a good price on it). The original parts were 22 gauge (.025″) which allowed for the sharp edge break (see the far left side of the first photo). That edge break is what secured the trailing edge of the panel to the fuselage by means of some welded tabs (red arrows). 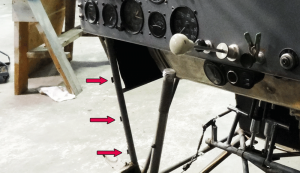 Unfortunately I had not considered the crucial edge break before I started and eventually realized I was in trouble when I couldn’t get a tight-radius, 180° edge break in this thick material. The solution was to eliminate the edge break, grind off the tabs, and make some “Z” brackets to secure the trailing edge of the panel to the vertical fuselage tube. 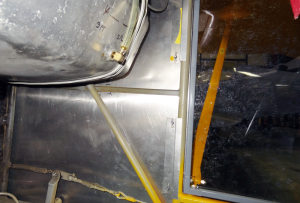 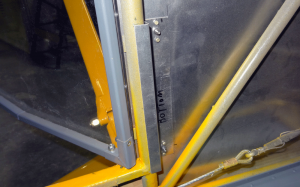 Personally, I think it’s an improvement over the previous design which always “bound up” whenever I would remove or replace them.