There are several varieties of Tailwind wings. My W8 has the flat-bottomed, short type. “Flat-bottomed” in the sense that the bottom surface is literally flat – not rounded. And “short” in the sense that they don’t have the extended triangular tips which are about 18″ longer and proven to add lift and reduce drag. I REALLY wanted to modify my wings to the triangular tip design and this would have been the best time to do it, but it would have been a significant process. After weighing the pros and cons and really looking at the bigger picture, it was best for me to stay focused on the original plan which was to re-cover the wings and fuselage and get back in the air.

The short wing tips get their shape from a piece of half-inch tubing that is secured to the outboard edges of the spars and then curved inward toward the navigation light. The span of tube between the front and rear spar is completely unsupported which isn’t necessarily a problem, however when the fabric was shrunk down onto the wings it pulled this section of tube inward significantly. According to the blueprint, this section of tube should be straight, but on my wings it was arched inward almost one inch.

Unfortunately I didn’t take any photos that clearly showed the severity of the bend. You can kind of see it in this photo, but keep in mind that it was taken at an angle and not directly from above.

To prevent this from getting worse with the new polyfiber skin, I used some heat to bend the tubes straight.

Then made some compression struts and positioned them exactly half way between the front and rear spars. This will significantly improve the rigidity and I’m confident they will remain straight when the wings get covered. 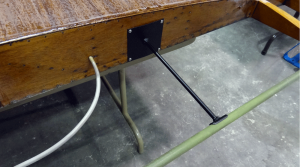