I don’t know the actual age of all the windows on my Tailwind, but they have all sustained their share of damage over the years. One of the back windows has a sticker for “Sun ‘n Fun 1976” so I can confidently assume that they are both over 40 years old. The two rear windows and two front side (triangle) windows have sustained some crack-shatters.

I don’t know what they were made of. Based on the way they cracked it would be easy to think they’re made from plexiglass, but if they were made from plexiglass then they wouldn’t have been able to have the 90° edge breaks in them. The door windows are in fair condition with some minor scratches, however as stated previously, they are too small for my liking. The windscreen is most likely made from polycarbonate – or at least it has the characteristics of polycarbonate – because I did a 90° bend test on one of the corners and it did not crack. It bent. I have had some issues with it in recent years, specifically with “fogging” up. I was able to get rid of the fog with some Meguiars Plastx, but that’s quite a task. Furthermore, the windscreen has some deep scratches that I’ve been unable to get rid of.

I’ve decided to replace every window with 1/8″ polycarbonate (aka LEXAN). After shopping around (online and locally) I found that Home Depot Aircraft Supply had the best price on polycarbonate AS LONG AS I’M WILLING AND ABLE TO DO THE HARD PART of measuring and cutting out my own parts. There were some places in town that could do the cutting and shaping for me, but they don’t do it for free (understandably) and it would have been impossible for them to get everything right the first time based on instructions from me. While working on my Tailwind for the past five months I’ve learned that for the most part it’s not symmetrical. Everything on the left side has been a little bit different than their right-side counterparts. This means I won’t be able to make a left side window and then duplicate it for use on the right side. Every window will be unique unto itself.

Home Depot sells a “48 in. x 96 in. x 1/8 in. Clear Lexan UV Stable Polycarbonate Sheet” for $185. The “UV Stable” aspect is especially important to pay attention to otherwise the material will begin to tint yellow as it ages. I had to buy two sheets to complete the job, however when I was done I had a 48″ x 60″ section left over.

As typical, I forgot to take a straight-on photo of the windscreen! (Scroll to the bottom for an update.) 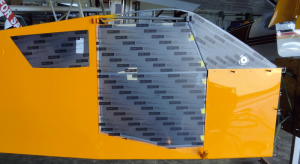 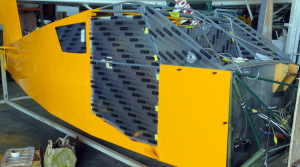 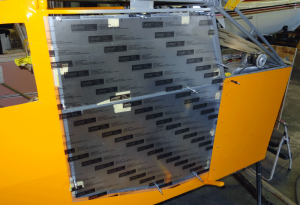 If I could go back and do this process again, I would make everything from 3/32″ (.093) material instead of 1/8″. That extra 1/32″ of space would have made everything fit together easier, especially around the doors and retrofitting the old trim around the windscreen. 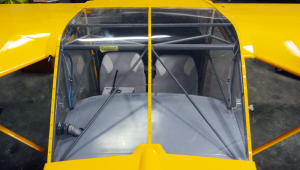