Mexico Memorial was about an hour. Long enough to fuel up, drain, take a picture, check email (the pilot's lounge at this airport is really nice with comfortable furniture and wi-fi), and drain again. Total time on th" />
Skip to content

The stop at Mexico Memorial was about an hour. Long enough to fuel up, drain, take a picture, check email (the pilot’s lounge at this airport is really nice with comfortable furniture and wi-fi), and drain again. Total time on the ground was less than an hour and before I knew it, I was looking down upon downtown Mexico, Missouri (from the north). 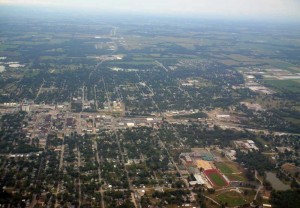 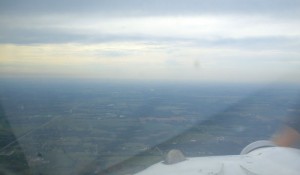 I called flight services from Mexico. They said there were no TFRs or adverse weather that would affect my flight to Columbus, Nebraska so with the first major leg of my cross-country done, I thought this would be a good time for a first photograph as an aircraft owner. :D 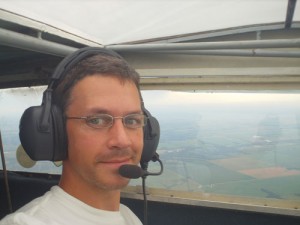 Less than 25 minutes after departing Mexico, I passed the airport I had originally planned as the first place to land at for fuel, Omar N Bradley Airport (KMBY), Moberly, Missouri.

1-hour 45 minutes after passing KMBY, I flew passed Shenandoah Municipal Airport (SDA) and decided to take a picture of it.

There was this little town that looked to be about a half square mile just sitting alone in the middle of thousands of acres of fields. I could see a track and baseball field, a water tower and grain silos near the center, and figured this had to be one of those places where everybody knows each other. I’ve since looked it up and it’s called Farragut, Iowa.

It appears there is some flooding from the Missouri River, but according to the Google satellite view, it’s hard to tell just how much is flooding and how much is always there. The S-curved trees on the right side are supposed to be the east and west banks of the Missouri River as well as the state line for Ohio and Nebraska. This photo is looking south which means I’m 10 seconds away from Nebraska, the fourth state I’ve flown through (or over) today. 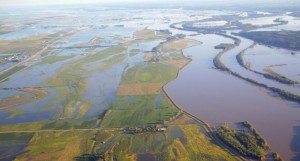 I touch down at Columbus Municipal Airport (OLU), Columbus, Nebraska at exactly 8:00 PM local time. The sun has just set so it’s still light out and it’s hot and there is nothing happening here. Someone at Mexico told me this airport has courtesy cars to drive to town in and a pilot’s lounge to sleep in, but I’m not finding either. I begin to wander around and find there’s one guy doing work on a fleet of Air Tractor crop dusters and when he saw me, he 180’d faster than a new aircraft owner flying his prize into a midwest afternoon thunderstorm. Perhaps being social might not be tolerated at this airport. I find the FBO and the door is locked, but thankfully there’s a sign on the door that reads, “After Hours Service” and it has five phone numbers on it. My plan is to get fueled up tonight so I can leave as soon as the sun comes up tomorrow morning (6:30 AM sunrise), so I call the first number. No answer, so I leave a message and ask them to call me back. I try the second number. No answer, so I leave a message and ask them to call me back. The third, fourth, and fifth numbers are the same thing. No answer, so I leave messages asking them to call me back. I’m starting to think that not only is being social not tolerated at this airport, but being helpful might be frowned upon as well. :(

This was the scene at 9:00 PM, and no, this isn’t an enhanced or edited photo. It really looked like that.

There were also frogs (or toads) hopping around on the warm pavement.

The door of the FBO had some instructions for locating the “Pilot’s Lounge”: FOR AFTER HOURS PROCEED TO THE SOUTH BRICK BUILDING (NORTH DOOR) BREAKROOM & RESTROOMS AVAILABLE. What they did NOT say is that you’ll have to walk through the airport’s locking (repeat, LOCKING) security gate to access the north door of said brick building. They also didn’t provide any clue as to what the security combination password was to re-enter through this gate!

So, am I the first pilot to ever land at Columbus, Nebraska who thinks this is a problem? Seriously, does anyone else see a problem here? Do they really expect pilots to walk through this gate and lock themselves outside of the airport, unable to access their planes without any reassurance they’ll be able to get back in? If it were daytime, then it wouldn’t be so much of a problem, but as we’ve already learned, this airport has nothing going on, nobody answers their phones, and the only signs of life are some frogs and 180-Air-Tractor-guy.

Well, good thing I had a bottle of water in hand. I used it to block the gate from latching so I could walk over to the north door of again-said brick building. I was able to access the brick building and once inside, there was a pilot-clue for the password for accessing the break room. And sure enough, it was definitely a break room. I was hoping for a pilot’s lounge, but this was definitely not a pilot’s lounge. It was the typical break room you’d find at any 9-to-5 workplace. A sink, a fridge, a table, some cafeteria chairs… the key genetic components of a break room. In one corner, there was an office chair with an ottoman. It reclined a little further than the coach seats on a commercial airliner. As tired as I was, there was no way I’d be able to sleep in it so I went back to the Tailwind and slept across the seats.

It was not a good night’s sleep.