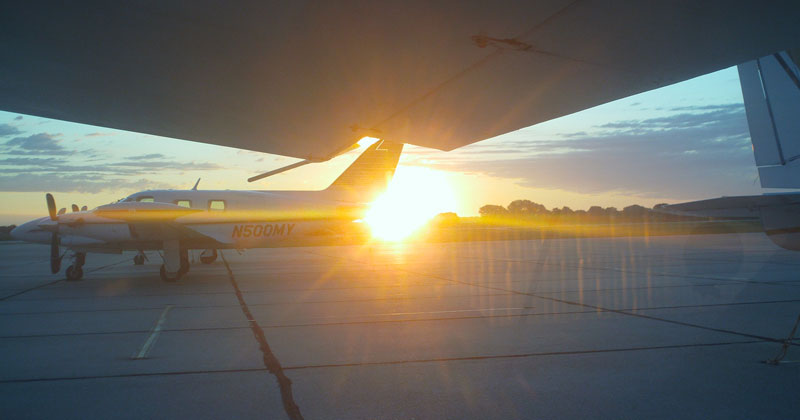 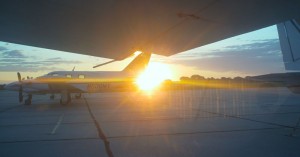 This sunrise means it is officially day 2 as a new airplane owner, but I’m starting to feel like I’ve owned this Tailwind for a long time. Still, I’m stoked with the thoughts of the places I will go after I get home and get accustomed to my new bird, and with this burst of excitement and enthusiasm, it doesn’t matter that I’ve had but a few hours of sleep in the past three days so I get out of bed and make my way over to the break room to brush my teeth and start my day.

6:45 rolls around and I anxiously await someone to be showing up at the FBO any minute so I can get some fuel and be on my way. BTW, not one person from any of the five phone calls I made last night called me back – not even a text message!

7 o’clock and still nobody is here.

At 7:30 I begin calling the phone numbers that I called last night, once again leaving messages saying that I’m at the airport and need fuel and please call me back. Then I start wandering the premises looking for any sign of life because as far as I can tell, I’m the only human within this 602-acre parcel called KOLU.

Eventually, I come across an open hangar with music playing and a guy tucked inside the cockpit of a Cessna 210 performing some maintenance. I announce myself with a “Good morning”, but from the response I got, I can only guess that this guy slept in the office chair that I avoided last night. I ask him if he knows when the FBO or fuel services open. “No, I don’t”, was his response and he turned away to resume the job I had disrupted him from. So much for small talk. Needless to say, I didn’t spend much time in his hangar.

At 7:45 I’m starting to get impatient. No, wait, I was impatient at 7 o’clock. Now I’m starting to get pissed. Nobody at this airport wants to be helpful, nobody wants to answer their phone, and nobody is here to pump fuel. Aside from yesterday’s stop at Montgomery-Wehrman, every airport I’ve ever flown to — EVER — has had self-serve fuel so as part of my flight planning I never took into consideration that I would be delayed by waiting for someone else to pump my fuel. My plan was to be in the air at 6:30 AM, but it was now well over an hour past that and it might not be until 8:30 or 9 o’clock that I can get out of here!

I walk back to the FBO, read the sign that says “After Hours Service” and start calling the phone numbers again and leaving messages. This time, when I get to the number that was labeled “HOME”, a woman answers. I tell her I’m at the airport and I need fuel. Her response, “Sir, it’s Saturday morning and we don’t open until 8 AM on Saturdays.”

OH, REALLY? YOU DON’T OPEN UNTIL 8 AM ON SATURDAYS. GEES, I MUST HAVE MISSED THIS VALUABLE PIECE OF INFORMATION ON YOUR SIGN… OH, WAIT, YOU DON’T HAVE A SIGN!!!

If people are supposed to know that you don’t open until 8 AM on Saturdays, then it would seem customary (at least in the rest of the world) to hang a sign saying this. Gees, even a post-it note would have been helpful! 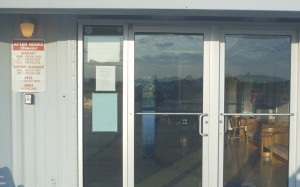 A guy does show up at 8:00 AM and to his credit he’s quite the gentleman. The opposite of what I had experienced so far in my brief, unrestful stay in Columbus, NE. Very friendly. Very social. Despite being behind schedule, I end up chatting with him and another pilot for about 20 minutes. Both were really nice guys.

I’m in the air at 9:00 AM local time, two and a half hours behind schedule.

This is what I saw for the next two and a half hours. Nebraska is FLAT!

An hour and a half after leaving Columbus, I flew past Rock County Airport (RBE) and keeping with the theme of this trip, I took a picture of it.

It wasn’t until I neared South Dakota that the terrain began to change. No more flat landscape for as far as the eye could see. The canvas shaping before me was the result of millions of years of geologic activity. 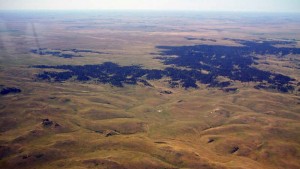 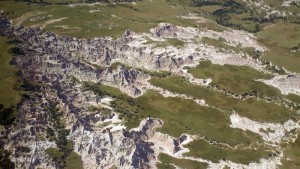 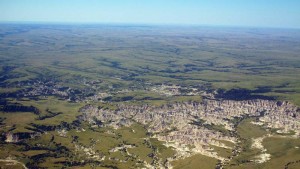 What I saw next was an unexpected surprise and it took me quite a while to locate this on Google Earth, but it’s some sort of “monument circle” on the Pine Ridge Reservation of East Shannon, SD. If anyone knows some information about the history of this location, then please share in a comment below. Sadly, of all the places on my trip, this is when my camera screen decided to black-out on me so I couldn’t see the shot before I took the picture. :-(

UPDATE: July 2, 2015 – I had forgotten about this photograph and did a little googling to see what this circle represented. It’s a Native American Medicine Wheel. Among my research I came across this sad article as well as this one about the Pine Ridge Indian Reservation.

Here is that location on Google Maps.

The White River in South Dakota. Here is that location on Google Maps.

Fueling up at Rapid City (KRAP) was quick and painless. I sat in the pilot’s lounge at the FBO and checked weather on my laptop for the next legs of my flight. There was a big screen TV in the lounge that was tuned to The Weather Channel and the topic of their discussion was the crazy, out-of-control thunderstorms that were sweeping through Missouri, southern Illinois… the same storms that grounded me yesterday!

The next destination on my flight plan was Laurel Muni (6S8) located in Laurel, MT just outside of the Class Charlie airspace of Billings, MT (KBIL). I arrived here at 2:15pm local time. There was a fire in the vicinity and a TFR required me to fly about five miles south of the airport before crossing the Yellowstone River northbound to enter a left downwind for runway 22. A gentleman based at the airport (I can’t remember his name, but I think it was Steve. He was a gun and knife aficionado.) saw me fueling up in the grueling heat, stopped his car and started talking through the fence and invited me over to his hangar-office-lounge to cool off and rest for a few minutes before continuing about my journey. Because of the 2.5 hour delay I had this morning at Columbus, NE (KOLU), I was reluctant to accept his offer because I was suffering from get-there-itis and wanted to get home and sleep in my own bed this evening. As of right now I was approximately 4.5 hours away from home. Sunset would be happening at 8:15pm Yakima time and when factoring in the one-hour time difference between here and there, that meant I had seven hours to get home which was plenty of time including one necessary fuel stop. I was sweating through my clothes and only had two bottles of very warm water so after fueling up, I walked over to his hangar with the intention of staying for about 15 minutes.

Inside the hangar was the most inviting air-conditioned environment and comfortable seat to relax in. What a treat! We started talking and I told him what I was up to, having purchased my Tailwind about 48 hours prior. Eventually I told him that Mike Butterfield at Yakima Aerosport had taught me how to fly and he knew exactly who Mike Butterfield was. An hour and ten minutes later I said I needed to get going because I wanted to get home before dark. After he heard my plan to get back to Yakima that night, he insisted that I abandon that idea and fly to another airport that had a pilot lounge (which was more like a mother-in-law apartment) with a shower, a courtesy car, a place to sleep, etc. I laughed and told him that the people at Mexico, MO had told me the same thing about Columbus, NE and that is why my day started 2.5 hours behind schedule! He insisted that this place was legit and that he’d never heard a pilot complain about it so I took his word and OMFG I’m so glad I did. I won’t mention this little gem of a pilot stop-over on this website because I don’t want it to get abused, but if you contact me, then I will tell you where it is. Also, this place is 100% free and only relies on donations so if you plan to stay there, then plan on leaving a donation and also plan on leaving the place CLEANER than you found it (Hint, hint: Wipe your dribbles and splatters from the top AND bottom of toilet seat!) Also, plan on bringing your own towel. When I got there all the towels were either stolen or in the dirty laundry so I used four paper towels to dry me off after the shower, but that didn’t bother me. That was one of the most refreshing showers I’ve ever taken. 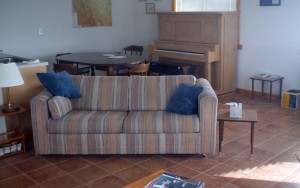 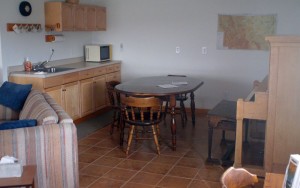 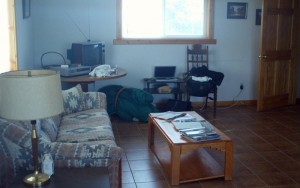 After my shower, I put on fresh clothes and took the courtesy car into town for some groceries, came back to the apartment, ate some food, read a magazine and fell asleep.