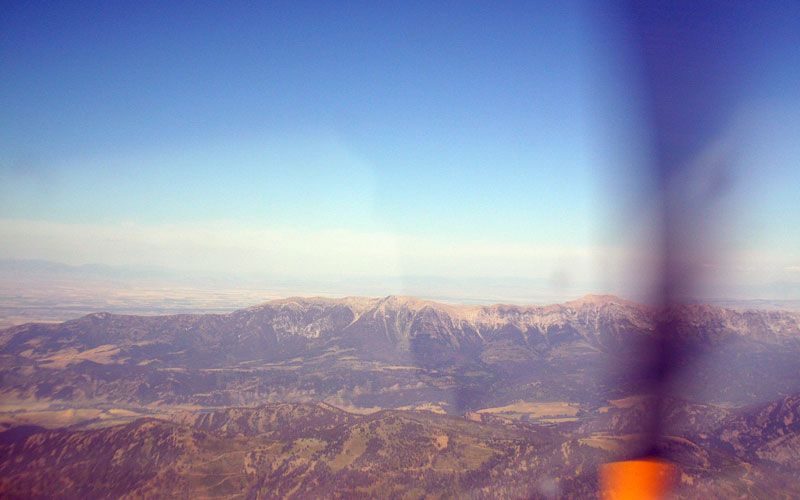 Wow, I was tired. I slept in til 8am. Granted, I had only slept about 8 hours total in the previous two days and I gained (or lost) an hour because this was Mountain Time, but I still wanted to be in the air by 9am. During the night, another pilot made his way into the lounge and slept on the other hide-a-bed and while I was getting a flight briefing that morning, he said he wanted to take me out to breakfast as a congratulations for my new airplane. By 10am local time, I was fueled up and in the air headed to my next (and final) fuel stop in Missoula, MT (KMSO). 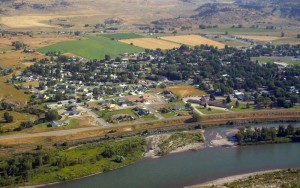 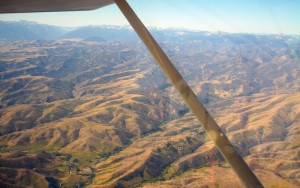 Outside of Belgrade, MT was the Bridger Mountain Range which included Baldy Mountain and Saddle Peak.

FINALLY, Missoula is within sight. One last fuel stop before I fly home.

10 miles southeast of Missoula is when things got interesting and not in a good way. I called the tower for a clearance, but they didn’t reply back to me. At seven miles out, I called the tower again. The tower’s response was very scratchy, but still audible, and they said to enter a left downwind for 29. Hmmm, strange. I was not expecting that, given that runway 29 was in plain site directly in front of me. In Yakima, the tower would have told me to make a straight-in for runway 29, so I thought perhaps I messed up and told the tower I was southwest of the airport so I responded back that I was southeast and asked for confirmation that they wanted me to enter a left downwind for 29. Once again, their reply was incredibly scratchy, but I was able to make out the words, “… stepped on your transmission, enter a left downwind for 29” so I changed my heading to remain south of the airport, eventually flying over the Clark Fork River before turning northeast so I could enter the pattern in a left downwind for runway 29.

Upon entering the downwind leg, I called the tower to let them know my position. Their response again was scratchy, but I was again able to make out the words, “… stepped on your transmission… left downwind 29” so I continued with my left downwind for 29.

When I was abeam the runway numbers, I called the tower to ask if I was cleared to land. Once again, their reply was scratchy and they tell me that I’ve been stepped on so I call back with a full communication to eliminate any possible confusion about who I was or where I was.

“Missoula Tower. Experimental 11018. Left downwind for 29. Were we cleared to land?”

“Experimental what? Where are you?” was the unexpected reply.

“Experimental 11018 is left downwind for 29, about a quarter mile south of the numbers at four-thousand feet.”

“Experimental 118, you were not cleared into this airspace! Without delay, runway 29, wind 300 at 3, cleared to land!” Then he proceeds to tell other aircraft to hold short, extend downwind, make a right 360 for spacing…

So I land and before I’m slowed down he barks, “Experimental 118 turn right on alpha 3”.

After he clears one plane to take off and another one to land, he proceeds to rip me a new one over the radio for all on the frequency to hear: “Experimental 118, this is a class delta airport. This is controlled airspace which means you need permission to enter it. You never requested nor were you given permission to enter this airspace. Say your intentions!”

“There’s no self-service fuel. Proceed straight on alpha 3 and turn right to Northstar.”

By the time I got to Northstar there was already a guy coming out to marshall me in which means he was most likely listening to that whole ordeal on the radio. “How’s it going?”, he asked in an uncomfortable tone, and with that I could tell he had just heard everything. All I could do was sheepishly tell him I just had a huge misunderstanding with the tower. I went inside to use the facilities and pay for my fuel. When I walked through the front door, all eyes were on me. Tower and ground control could be heard on the radio in the background which undoubtedly means that everyone in there had heard about the moron that entered controlled airspace without a clearance and now they were staring at him. If there was ever a moment in my life where I wanted to tell my side of a story, this was it. Uughhh. :-\

I paid for my fuel and asked for the tower’s phone number, then walked out of that FBO with my tail between my legs.

Back at my plane, I called the tower to apologize to the controller. The person that answered the phone just happened to be that controller, now on his break. I explained what had just transpired and how I had been “communicating” with him all along and every time he “responded” to me saying that I had been stepped on, well, it began to become clear that I was the person that had been stepping on everyone else!

That controller was actually very polite and didn’t interrupt me once while I explained myself and when I was done, he apologized for chastising me over the air and said he had no intention of filing a complaint with the FAA, but he did express how I screwed up his plans with the three aircraft that were in the pattern for landing and the two on the ground ready for take-off. My fabric-covered airplane never even blipped his radar screen so he had no idea I was there, and after finally making contact with me, it appears that I had cut in front of another plane also on the downwind so when all things were considered, this was a major safety hazard and that’s what concerned him most. I apologized again and so did he, then I hung up to do a radio check. This is when the real cause of the problem was discovered.

I unplugged the BNC for the COM antenna and plugged in the handheld’s whip antenna and tried again.

Holy crap! This meant something was wrong with my COM antenna or the wire leading to it. I looked under the fuselage and BAM, the problem was solved: my COM antenna was gone! It had fallen off somewhere over the mountains of Montana. Now it made sense why I never heard any of the other pilots on the frequency, and since the tower broadcasts at many more watts than an airplane, it explains how I was still able to hear them, albeit scratchy, but every “clearance” for runway 29 that I received was actually intended for someone else.

I called the tower back and told my findings to the controller. He said it all made sense now and suggested I use the whip antenna until I got the COM antenna replaced.

If the Missoula tower controller who was working that afternoon ever happens to read this, then once again THANK YOU for your understanding and being a gentleman in response to the problem(s) I caused you. I learned to fly in the Class Delta airspace of Yakima so I’m well versed in tower operations, clearances, and communicating with them, and would never have intentionally entered Missoula’s airspace without following protocol.

In the air again…

About 10 seconds away from Idaho. I can’t find the name of this small lake, but it can be viewed on Google Earth. This photo was taken from the north, looking south and is about 1,000 feet off the Idaho Centennial Trail. If anyone knows the name of this Lake, please let me know. 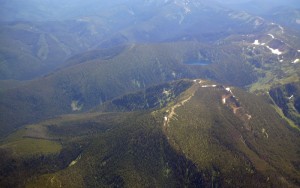 Here’s the approximate view as seen on Google Earth.

This was some uniquely colored land in Washington, right against the Idaho border. No color enhancing was done to this image. 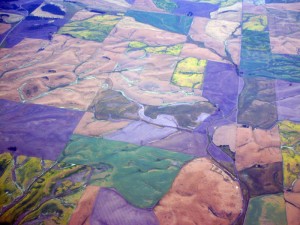 The Columbia River/Wanapum Lake, looking south at Vantage, WA. In the distance is the Wanapum Dam, Desert Aire, and the Priest Rapids Dam. Although you can’t see it clearly, the Wild Horse Monument is in the photo. 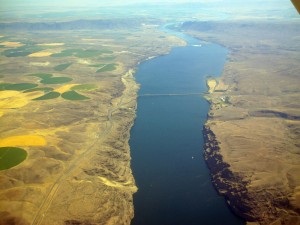 I finally arrive at Yakima, exhausted and physically aching. The seats in my Tailwind are extremely uncomfortable, and after passing Coeur d’Alene I encountered the most turbulent weather of the entire trip. There literally wasn’t 15 seconds that passed without the plane getting slammed up or down by currents. The most discouraging part was when at Coeur d’Alene the GPS said there was about 1 hour, 55 minutes remaining, then 30 minutes later the GPS said there was 1 hour, 40 minutes remaining. I was battling a hot, 25-knot Central Washington head-wind and it hurt. I almost thought I was gonna have to land in Ellensburg for another fuel stop, but thankfully that wasn’t necessary.

I landed at Yakima at 4:40pm, got out of the plane, then spent the next hour standing up.