A new propeller has been on my list of upgrades for a long time and after a lot of research and a fair bit of input from the Tailwind Group, I decided to go with a Whirlwind ground adjustable. They have a model which is made specifically for the Continental O-200. Some of the others I considered were Catto, Sterba, Prince, and Ivoprop, but ultimately I wanted something that I could fine-tune which narrowed the list to Whirlwind and Ivoprop. Not being able to find any online testimonials or videos about the Ivoprop and the fact that Jim Rust (the owner of Whirlwind) built a Tailwind helped me choose the Whirlwind GA-200CN model. Unfortunately they produce this model only in 70 and 72-inch diameters which would legally be too long for my airplane.

Legally too long. What are you talking about?

I was never aware of this, but there is a specification found in 14 CFR § 25.925 – Propeller Clearance that states how long your propeller can be. More specifically, § 25.925(a) describes the minimal amount of ground clearance the blades are allowed to have and it varies based on whether the the propeller is installed on a tricycle or tailwheel airplane. To paraphrase, “There must be a clearance of at least nine inches (for each airplane with tail wheel landing gear) between each propeller and the ground with the landing gear statically deflected and in the level takeoff, or taxiing attitude, whichever is most critical.” My previous propeller was 68″ and provided 8-inches of ground clearance in level take-off attitude which meant all this time I had been flying with a propeller that was legally too long.

When placing my order with Whirlwind (in September 2016), they told me they could not make a propeller that was shorter than 70-inches and if I wanted it shorter I would have to modify it myself. Lucky for me, about a week after I ordered the propeller, I got a call from Patti Rust at Whirlwind. She said, “I have good news and bad news. The bad news is we haven’t been able to get started on your propeller yet, but the good news is one of our customers canceled his order for a 66-inch propeller so if you want it, we can send it to you.” I didn’t ask questions about why they couldn’t modify a propeller for me, but they could modify it for someone else. Instead, I assured her that YES I wanted it and within a few days I had my propeller. Total cost was $2500 + $75 shipping. I purchased the carbon fiber spinner at a later date for $375 + $50 shipping. 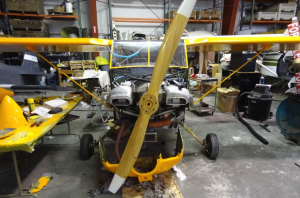