This morning I felt adventurous and wanted to practice landing at different airports in a variety of settings and, really, see how many airports I can visit before my rumpus maximus was too sore to continue. I’m proud to say I made it to eight different airports. Yakima to Cle Elum to Ellensburg to Quincy to Lake Chelan to Desert Aire to Sunnyside to Prosser to Yakima. I mounted the GoPro to the skylight and am pleased with how the video turned out… well mostly pleased. The GoPro auto-adjusts the picture brightness which makes the iPad look like it’s turned off for the entire flight. In reality, it was a glass-panel/moving-map/flight-recorder helping me all the way.

Then a touch and go at Ellensburg runway 7…

Then a landing at Quincy. There was a lot of turbulence in the pattern at this airport.

Then a landing at Lake Chelan runway 20. I did a touch and go at this airport back in 2010 when I was a new pilot, but this was the first time I’ve landed here. This is a “destination” airport for seasonal vacationers and the approach to the airport from the south is quite scenic with Lake Chelan and it’s surrounding mountains forming the backdrop. Downwind in the traffic pattern is over the Columbia River (technically Lake Entiat) while base and final are over orchards. This is a fun spot to fly in to.

I’ve never used the “panoramic” feature of my camera so I figured this shot of the taxiway (foreground) and runway (background) might be interesting. Unfortunately, my photo stitching skillz aren’t that great and the picture itself came out grey and dismal. Let me assure you the sun was bearing down and the wind was gusting though you wouldn’t think it from the picture.

This is what the trip looked like so far… 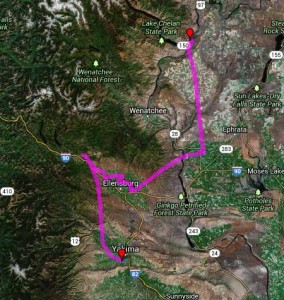 Then a touch and go at Desert Aire. The wind was raging at this place. I was coming from the north and planned to fly over mid field to check for a wind sock. I eventually spotted one at the approach end of runway 28 and it was swinging wildly but favoring a landing on 28. All was normal in the pattern, but something wasn’t right on the ground because I could not set down. I bounced once, twice, and the third one was gonna be hard so I firewalled it to go around. Once at altitude, I could see the wind sock was now favoring runway 10. I’m kinda pist because I thought I had set my GoPro to record at 60 fps, but it was recording at 30 fps. When reviewing the footage frame-by-frame, I can see as I was nearing the numbers of 28, that my attempt to land on 28 was down wind. That explained why I couldn’t set down. I entered a left downwind for runway 10, annoyed some golfers, and set down for a gusty touch and go.

Then a touch and go on runway 25 at Sunnyside.

Then an ugly touch and go on runway 25 at Prosser. I ballooned this landing, then bounced. I’m sure all attendees on the field had comments to make about what they saw or heard. I think I heard their laughter over the rumble of my engine.

Finally, back home at Yakima. I was cleared for a long landing on niner with a wind of 140 @ 9 knots. Things got hairy for a moment during a gust, then settled, then I bounced, then powered up to not slam down, then as settling down another gust took charge, then a not-so-greatly-executed 3-point landing. 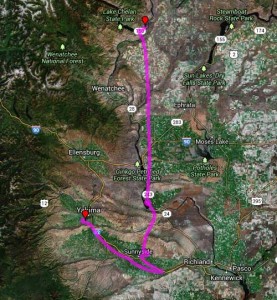 One thought on “8 Airports in One Day”