The wings are gonna need a fair bit of prep work done to them so they can be painted to match the fuselage (when it gets covered and painted). They have the original fabric from 1965 and peeling that away from the plywood skin from which it’s been adhered to for the past 52 years isn’t exactly the route I want to take. I’ve been advised to “rejuvenate” the wing fabric to prepare them for a layer of paint and fix some previous (ugly) repairs.

I was ready to get started when I noticed something that was never visible before because it was hidden under the wing root fairings. The fabric on both wings is torn pretty much from leading edge to trailing edge at the root along the top sides. 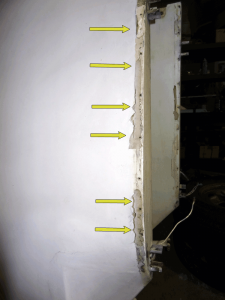 The fabric is torn from the leading edge to the trailing edge. 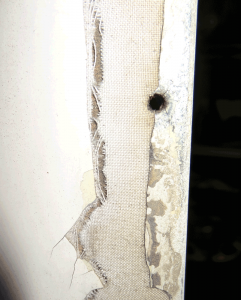 This is interesting. I stuck a screwdriver under the fabric to feel how far back the fabric may be unglued. It never touched glue! 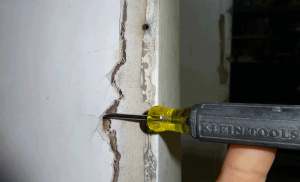 I slid a strip of aluminum under the fabric and it went in about 8-9″ before it made contact with any material that was still adhered to the wood, and it effortlessly separated from the wood when I nudged it in further. Basically, the fabric covering on both wings from the leading edge to the trailing edge was not glued down from the root until the first rib. 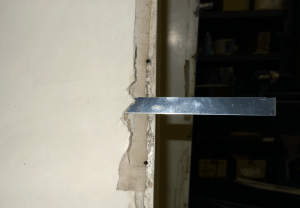 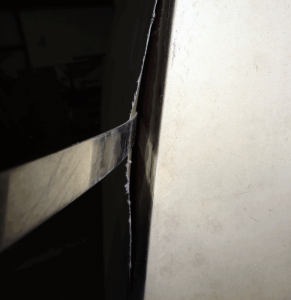 Given how easily (so far) that the fabric separated from the wood, I wondered if it would be a better plan to take everything down to the bare wood and seal it with Stits epoxy varnish and re-cover them with Stits polyfiber. I relayed my findings and sent photos to two of N11018’s previous owners and both agreed that completely removing the original fabric was going to be my best option.

That turned out to be a wise decision. The fabric was not glued down to the wings. In some places it was falling off under its own weight. I’ve had Christmas presents that required more effort to unwrap! 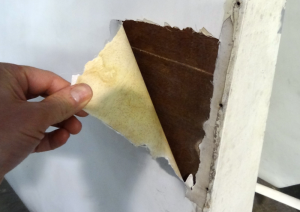 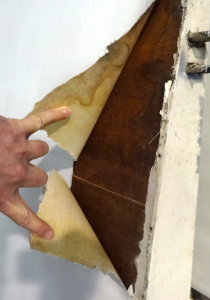 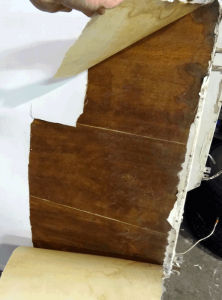 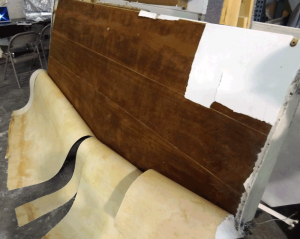 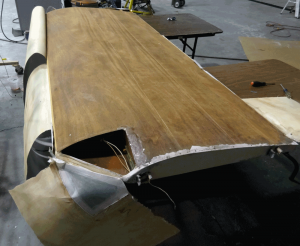 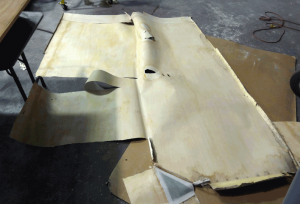 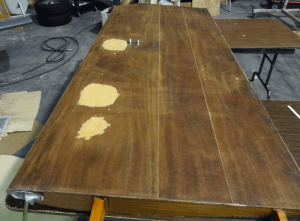 Peeling the big sections of fabric off took about 15-20 mins per wing and for the most part it all came off in one piece. It could have been faster, but I wanted to be careful. The only areas of trouble were all the bondo patches (or whatever that stuff is). Using a razor was the only way to remove the fabric from those areas and that took longer because the fabric was *really* bonded to the bondo. The passenger wing had three patches which were on the bottom. The other wing… wow, someone really went to work on it! Eight patches on the bottom and one on top which is connected to a hairline crack which extends from the leading edge to about the middle of that center sheet of wood. I wonder if something heavy was dropped onto it.

You can see water marks at the wing roots from where the fabric was torn front to back at those areas. The wood doesn’t feel like there’s any glue or residue on it. It’s just smooth. I’m hoping that with minimal sanding the wood can be prepped and ready for covering. With my work schedule, I was anticipating it being a week or so to completely remove the covering. Getting it done by myself in the latter half of an afternoon was a pleasant surprise.

This begs some questions though: Have I been flying a potential death trap? What really happened to Steve Wittman on that fateful flight? The FAA and NTSB reported that…

“Wing fabric dope was distressed or missing on the aft inboard portion of the left wing upper surface and along the entire length of the top of the main spar. Large areas of dope were also missing from the left wing undersurface. The entire fabric covering on the upper and lower surfaces of the right wing had delaminated from the wing plywood skin.”

and… “The entire fabric covering on the upper and lower surfaces of the wing had delaminated from the wing skin.”

I don’t know if the condition I discovered my wings in was just normal “wear” for a 52-year-old airplane or if I really was playing with fate every time I went flying. I can say with 100% certainty that the only places where the fabric was really glued was at the trailing edges of the wings where the fabric edges overlapped.

I’d welcome any feedback from anyone who might be better experienced than me in this area.